Adventures in life, learning, and recovery

Yes, I have been out of Sydney for almost 2 weeks; but it’s dangerous to drive a campervan and type simultaneously.

I’ve never liked running. The only running I ever really did was in service of satisfaction of an unhealthy compulsion. Only recently have I been able to use running in small (not very far, not very fast) pieces, to wake up and move, and now to find a beautiful and efficient way to explore peacefully and uninterrupted when visiting new places. It sometimes involves getting lost, it’s meditative and at least half of my best thinking lately has been done in the steady drum drum drum of my feet against the backdrop of newness around me.

Typically you get rain before the rainbow, but Sydney, it would turn out, had other plans.  The three days I spent in the city were brilliant. Of course, coming from the heat and humidity of Bali to the cooler Fall was a shock to the system to say the least. I was ill-equipped with only one “jumper” and a whole lot of cool loosey-goosey flowy fabric of tropics past.  The key – and I believe this is an ever-apparent and universal truth – is to stay in the sunshine.

Another post-Bali not shocking shock to the system: Sydney is not cheap. There is no getting around the vast jump in travel cost from Asia to Australia. But, since I knew in just days that I’d be living out of a campervan and hostels, Sydney was a small indulgence into first-world amenities (which were known to be short-lived) and the beginning of some very serious me-time (which was not to be short-lived). The breakout into solo travel came very naturally to me; freedom to stroll and lose myself accidentallyonpurpose just wouldn’t be possible with a posse. And even though I’ve gone all out of order with the blogging and I’ve spoiled the plot twist where things are not perpetual perfection, being on my own was – and still is – the best way I could have done this trip. There is something really comfortable in the silent spaces between interacting with other humans, the ability to choose when and if I deviate from the path to explore something interesting whenever I feel like it.  The pictures will give a pretty solid synopsis of the more typical seeings and doings that ensued throughout Sydney. But a few of my personal favourite things:

– the Bondi to Coogee beach walking adventure, for which I was barefoot for 90% on the 2 hour trek. No-pants Maddie is quickly becoming no-shoes-either Maddie, and it was worth every step, even the rocky ones. I came upon Coogee just in time for sunset (this has been somewhat of a theme of my trip, stumbling into destinations right at sunset, it’s brilliant), and this ended in a half-bottle of wine at the Pavillion and some very tipsy and honest journalling done as a result. I’m a cheap date.

–  realizing I really really like ferryboats. And parks, and being lost in parks…

–  the neighbourhood I quite randomly chose my hotel in: Potts Point. It’s a gorgeous and personality-filled neighbourhood right near King’s Cross, which felt to me like walking in a little Manhattan, or through charming streets of London, but with far less people. Maybe it was because Sydney was fully enveloped in Autumn, but the leaves falling after 5 weeks in Bali made me feel quite at home. That, and French-press coffee. Real, real, good coffee. And Simpsons of Pott’s Point was like walking into a time machine in the most glorious way. I felt like a princess for a full 3 sleeps, with a bubble bath jacuzzi spilling bubbles everywhere just like in the movies and being cozy in a bathrobe.

– spending some final precious time with Adyn, the breath-of-fresh-air first connection soulmate with a sexier voice than Sophia Bush, who I just wasn’t ready to say goodbye to in Bali. Thank you for the wine and the invisible little strings that connect our hearts (not in that order).

It went by far too quickly, but I did see a boat-load (ha!) of the sights before I was scheduled to pick up Bessie and depart for whoknowswhereisnext.

And so, just like in Bali, my last sunrise of Sydney found me running to the water.

Following those 3 days of beautiful weather in the warmth of Fall, Sydney had had enough of my sunshine, and broke into windy, drizzly greyness just as I arrived at the bay. It was timely, because it was not unlike other reflections I’d been having in my time there. Sydney was brief and beautiful. Almost unbelievably so. But brief nonetheless, starting with sunshine and rainbows but giving way to stormy skies. The tricky bit is knowing that the sunshine will return, but never knowing when those next gusts will pick up again and bring down the storm. By the time I’d made it to this point in my runaway train of thought, I wasn’t even thinking about the weather anymore. Worth the trip? Every time. Am I looking back? Maybe. Moving on? Moving forward.

I suppose I’ve finally started processing one of my own storms.

Sydney was everything and more that I needed and wanted.

Heart things come through when you’re a little bit quiet. 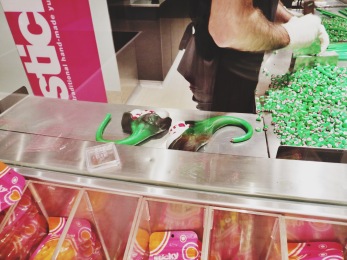 Candy-making at the Rocks 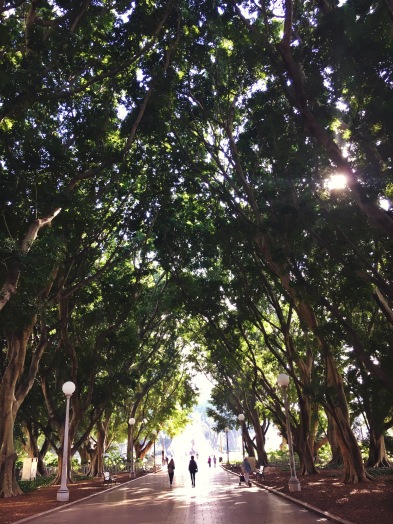 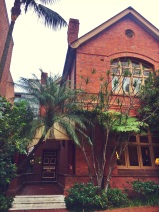 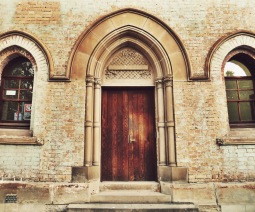 Waverly Cemetery, between Bondi and Coogee 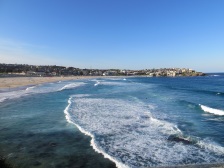 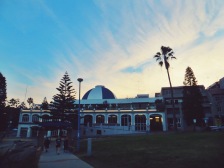 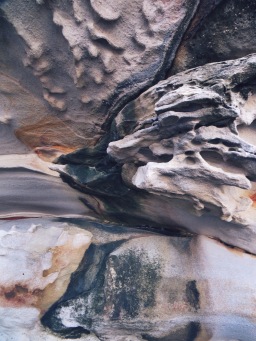 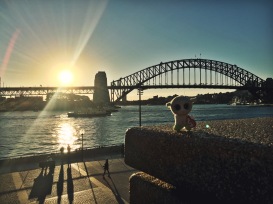 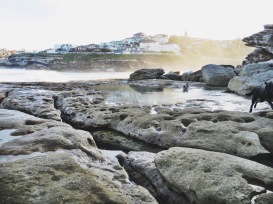