Adventures in life, learning, and recovery

Last night I almost gave up on the road-trip. Actually, I almost gave up the road-trip on night one. Yesterday, I got a parking ticket in Brisbane. I (literally) missed the boat on my Fraser Island tour for today and I felt really homesick for the first time since I left Calgary at the beginning of April. I cried and felt silly for it.

Yesterday’s “meals” consisted of 2 eggs and some mushrooms and an entire bag of sun-dried tomatoes. Today I had a coke zero for breakfast.

Pictures are funny. Because they are almost always perfect. And everything in Australia has been indescribably beautiful. None of the pictures truly do it justice. That really is how lovely it looks, and that really is how it feels, too – 99% of the time. But of course there have been moments. Like, for example, the camper van not starting in the pouring rain in the dark before even getting out of Sydney.

What have I gotten myself into?

Maybe I can’t do this.

Or last night’s nightmare drive. From Brisbane to Rainbow beach in the dark was probably the foggiest, darkest driving I’ve ever done. And I’ve driven Rogers Pass (British Columbia) in the middle of the night without flinching. Unlike Aussie-road-trip-night-1 though, last night I didn’t have a steady stream of traffic whose lights I could follow in the absence of my own fully functional brights. When I did see a car, it was usually rocketing past me since, y’know, they could do this drive with their eyes closed. Most Criminal Minds or horror movies start on a foggy, windy, windy (are those spelled the same?) road and the thought crossed my mind that I had no idea how far I still had to go or how far I had come from the main highway towards Rainbow. Actually, the thought went something like “This is it. This is how I die.”

[I suppose the drive to Rainbow beach at night should actually entirely suck because at the end of a storm is a rainbow, amirite?]

So the shenanigans of the day and night meant I missed out on getting a spot for today’s Fraser Island tour as planned. And so I decided I would just never mention any of this to anyone. I didn’t want to share what felt like a stream of continuous failure of how this road-trip adventure is supposed to look.

You should have planned better

You should have paid more attention to the parking sign

This wasn’t a smart way to do this trip; why did you insist on doing this?

Here’s the thing though: this trip is amazing at every single turn of the Pacific Coast highway. Everything is as magical as I could have hoped, aside from these few bumps along the way. I am the most fulfilled I have ever been. Ever. And, as promised, the Rainbow [Beach] at the end of the storm delivered in full colour.

This morning I got up and went to the beach. I wandered on the sand, into the surf and I picked up a little rock. Actually it might be petrified wood. Is petrified wood technically a rock? I’m not sure. Anyway, it looked like a heart so I kept it. I showered. I missed home and had a little cry. I packed up and I drove.

I listened to music that reminds me of my dad (which is mid 90s country and alternative rock – think anything from Dwight Yokam through Pearl Jam). I wont get to see Fraser Island this time, but that’s ok. I’ll just (happily) have to come back.

In the unending stream of living and lessons I’m picking up, I realized that when i saw my parking ticket, or drove that dark highway, I barely flinched. I handled it. Now maybe, as I’ve often surmised, I have no stress response left. My tendency as a child to feel flight-or-fight panic at very minor things like homework or thunderstorms, may have worn out my adrenals or stress responses so they no longer fire under what normal people would find stressful [editor’s note: there is no scientific backing for this working theory whatsoever]. Like murdery drives with no visibility or paying exorbitant amounts because of being useless at identifying the hours on no-parking zones*.

*it should be noted: these things had zero impact on  my excitement level for the Lone Pine Koala Sanctuary. Furry animals eliminate all traces of stress/anxiety/disappointment/sadness/frustration. It’s honestly best I was on my own for it, as anyone accompanying me would likely have been embarrassed by my 5-year-old-who-has-had-too-much-pop frenzied state.

Or maybe, just maybe, I’m actually brave. And, maybe, thanks to all the ocean exposure,  learning to roll with the waves a little bit more. I’m getting to Rockhampton early, I stopped in half a dozen cool little Australian towns and I may get to explore a little more between here and my final destination.

I’m finally figuring out, and slowly feeling like I believe, that the ugly bits are just as beautiful. That’s real; that’s life. It doesn’t have to be perfect, it can be really super pretty good.

Okay, one more thing, and I’m probably the only person on the planet who has had this thought, but the Sydney Opera House is um…a bit smaller than I thought it was going to be.

Things are not perfect. 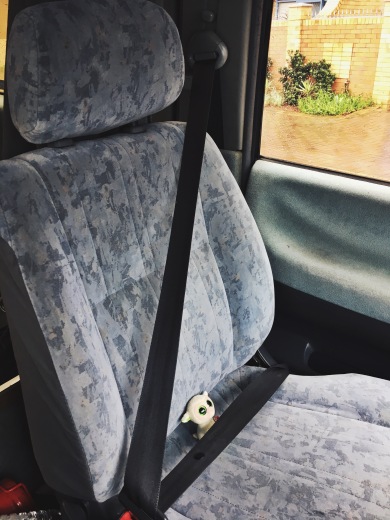 Ps. More posts and photos from Sydney onwards are coming. Wifi is not a thing in Australia the way it is in Bali. Go figure.